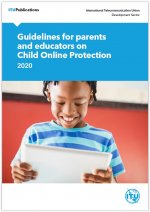 Guidelines for parents and educators on Child Online Protection

According to ITU data, there were an estimated 4.1 billion people using the Internet in 2019, reflecting a 5.3 per cent increase compared to 2018 estimates.
Children and young people use the Internet for a variety of purposes, from getting information for a school project to chatting with a friend. They are highly proficient in mastering complex programmes and applications, connecting to the Internet using mobile phones, tablets and other handheld devices such as watches, iPod Touch, e-book readers and gaming consoles.
The Internet has also acted as an important tool in the life of the different groups of children and young people with vulnerabilities. For migrant children it maintains a connection with family and friends and offers a window into the culture of their new home. It enables children and young people with disabilities to socialise and to be involved in activities that are unavailable offline, and provides opportunities to be at an equal footing with peers online, with abilities more visible than disabilities.

However, the Internet along with providing access and opportunities also provides risk and harm, with some more prone than others. For instance, for migrant children and young people, the consequences of online breach of confidential information could be dramatic - in the wrong hands, data could be used to identify, and target people based on their ethnicity, immigration status, or other identity signifier; for children and young people with autism spectrum disorder (ASD), social challenges such as difficulty in understanding others’ intentions, can leave this group vulnerable to “friends” with bad intensions; and children and young people with disabilities are more prone to exclusion, stigmatization, and manipulation.

Many parents and guardians are under a common misconception that their child is safer if they use the computer at home, or at school, than elsewhere. This is a dangerous misconception because the Internet can take children and young people virtually anywhere in the world, and in the process, they can be exposed to potentially dangerous risks, just as they could in the physical world. However, children and young people do experience slightly increased risk of harm when accessing the Internet via a smartphone, tablet or other handheld devices. This is because these handheld devices give instant access to the Internet from anywhere and are less likely to be monitored by parents or carers.
These guidelines have been developed within the child online protection (COP) initiative, as part of the ITU Global Cybersecurity Agenda3, with the aim of establishing the foundations for a safe and secure cyberworld not only for today’s youth but also for future generations. These guidelines also focus on children with vulnerabilities, particularly, migrant children, children with ASD and children with disabilities.

The guidelines are meant to act as a blueprint which can be adapted and used in a way that is consistent with national or local customs and laws and address issues that might affect all children and young people under the age of 18.

The guidelines for parents and educators serve as a practical tool to help them to effectively support children and young people's interaction with the online world, to sensitize families to the potential risks and threats and help cultivate a healthy and empowering online environment at home and in the classroom. They emphasize the importance of open communication and ongoing dialogue with children, to create a safe space where young users feel empowered to raise concerns.