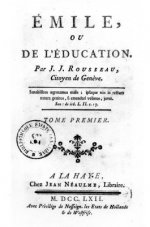 Rousseau traces the course of Èmile’s development and the education he receives, an education designed to create in him all the virtues of Rousseau’s idealized “natural man,” uncorrupted by modern society. According to Rousseau, the natural goodness of a man can be nurtured and maintained only according to this highly prescriptive model of education, and Rousseau states that his aim in Èmile is to outline that model—a model that differed sharply from all accepted forms of the time.

The system of education Rousseau proposes details a specific pedagogy for each stage of life, an educational method that corresponds with the particular characteristics of that stage of human development. Accordingly, Èmile is divided into five books, each corresponding to a developmental stage. Books I and II describe the Age of Nature up to age twelve; books III and IV describe the transitional stages of adolescence; and book V describes the Age of Wisdom, corresponding roughly to the ages of twenty through twenty-five. Rousseau claims that this stage is followed by the Age of Happiness, the final stage of development, which he does not address in Èmile.