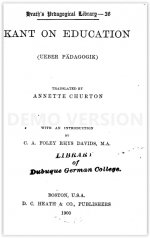 NEARLY a century after its original publication in Germany Immanuel Kant über Pädagogik is now for the firsttime presented to English readers in the translation made by Miss Annette Churton.

The little work, as is well known, was not compiled for publication by the master himself. In the last years of his long life he handed over to his younger friend and former ~ pupil, Theodor Rink, the notes he had written for his professorial courses on Physical Geography and on Pedagogics, and commissioned the latter to select and compile from the loose leaflets as much as he thought might prove serviceable to the reading public. Rink set to work and brought out the notes on education in 1803, the year before Kant's death.

The lectures, it seems, were not intended to give an exhaustive theory of education, nor do they present any well-formulated body of philosophical doctrine based on either metaphysical or psychological or sociological data. Kant's chair at Konigsberg University was that of logic and metaphysic, but his lecturing work-both as professor and, before that, as Privat-docent included a number of subsidiary subjects.

During the last quarter of the eighteenth century pedagogics was included as a subject of instruction in the university, certain professors taking it in turn to deliver a course of lectures thereon. When the course fell to Kant he conformed, as was his wont, to the not unusual custom of taking a standard textbook on his theme-in this connection it was that of his colleague, Prof. Bock, Ueber die Erziehingskunst (Konigsberg, 1780) as a nominal guide to procedure.. But he did not allow the exposition of the book to hamper him in the original and constructive treatment of his subject. There is, indeed, no very apparent trace of Bock in these notes. The text-book, being in his hand and accessible to his hearers, probably required no memoranda for exposition , and criticism of it. Whether he expounded and criticised or not, the legacy transmitted through his pupil to posterity consists simply of a number of independent reflections, of criticisms not relating to Bock, of series of apophthegms, suggestive points, aperpus, with here and there . digression and repetition.'

Above all we feel that, according to his usual method, the master is addressing the average youth among his listeners. The toughest things of the Critiques are not drawn upon, nor is there any terminological paraphernalia to deter the listener. The Kantian ethic is there, right enough, but the teacher is feeling out after a theory of education. He is deeply interested in his theme, but his attitude towards it is inductive and experimental. He realised its importance and the magnitude of its issues, but also the imperfect and provisional nature of existing conclusions on the subject. There was his nine years' experience as a private tutor to correct any rash theorising-he used to say he had never been able to apply his own precepts in any specific case among his pupils ! And his long academic career must have afforded him very varied insight into the nature of youthful development. But it was above all the time and the man that left the thoughtful minds of the last quarter of the eighteenth century no option but to be intensely concerned with the problem of education.

The doctrine of the rights of man, the conviction of the worth of the individual aa such, was taking flesh to dwell among us. The child too, qud child, had rights to be let iive his child-life and enjoy his youth. Laissez ntarir I’enfance duns les enfants ! pleaded the book which was the charter of the rights of the child-I allude, of course, to the dntile-they have their own ways of seeing, thinking, feeling. Be not for ever seeking the man in the child, heedless of what the child is in and for himself. He is not simply ‘undeveloped man, but diverse.’ His plane of being is one of transition, no doubt, yet in a way it is independent, positive, integral, amicrocosm. If he die young, look on him not merely as a failure, (I bud nipped off, but as on0 who for a while and in his own way has tasted sweet life. And sea to it that life to such has been’ made sweet ! Let the child, echoed Kant, be traited as a child and not as a Burger. He had, of course, to be trained up in the duties he owed to a social macrocosm, but this entity was not so much a definitely conceived state-that ideal was of the past and not yet re-born-as a vaguely comprehensive humanity of independent individuals. The child was to graduate as a Weltburger. Nor was the community of children, nor were their claims on each other, very definitely taken into account. That also was to come. The individualism of the time saw only the Child and the Man, the nature of him overlaid by a crust of privilege, convention, and corrupt tradition. This was to be broken 'away; and the common nature that lay stifled beneath elicited and developed by a wholesome culture that should be all-powerful to redeem and reform. So would the moral sense innate in him sprout and burgeon, till the dignity of Man in the blossom of the Youth should stand confessed and vindicated.